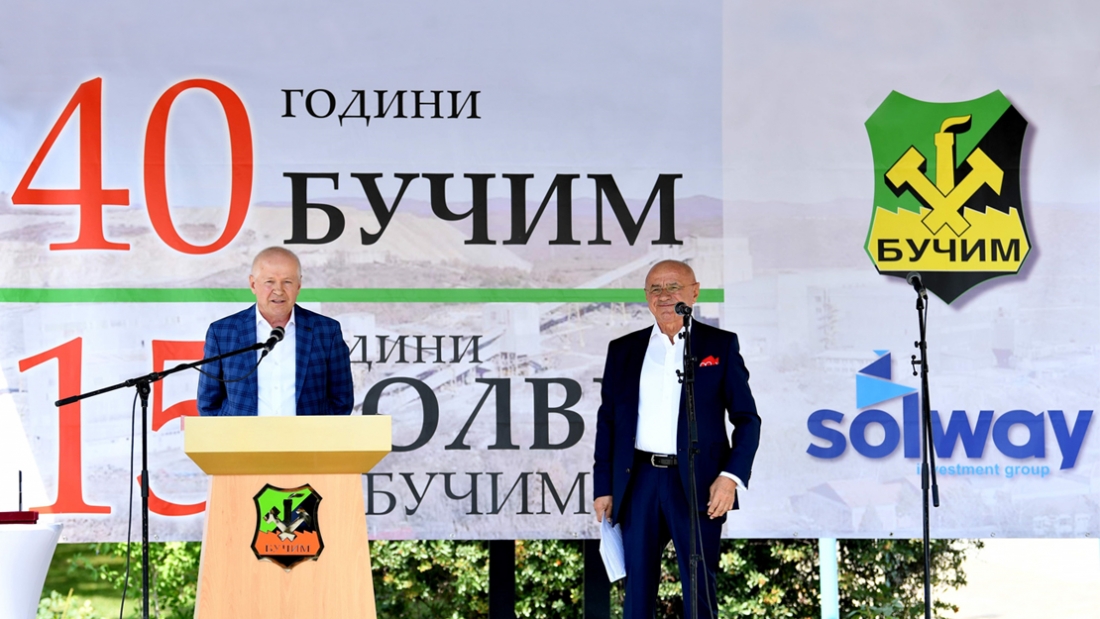 Today Bucim DOO Radovish, the only operating copper mine in North Macedonia, is celebrating 40 years of operational activities and contribution to the economy of its home country, region, and town. The official celebrations took place this morning in the municipality of Radovish in the presence of the Prime Minister of North Macedonia, Zoran Zaev, other honored guests, partners, and members of the community.

In 2019, Buchim also marks its 15 years of operations under the Swiss-based Solway Investment Group. Since 1979, Bucim has been welcoming all the changes and opportunities required to evolve, exist, and remain a successful producer, responsible neighbor, and a fare employer. During the past 15 years Bucim has been and still is experiencing exceptional growth and development.

Today Bucim mine is the leading mining project and the only operating copper and gold mine in the Republic of North Macedonia with an annual production capacity of over 40,000 tons of copper concentrate containing gold.

To secure Bucim’s success Solway Investment Group has invested over 78 million euro in the mine’s modernization and development since 2005. During all those years Bucim has been contributing to the occupational health and safety initiatives, environmental safeguards, and the development of municipal infrastructure at Bucim, its hometown, and neighboring municipalities. The amount of social investments into the civil infrastructure development, occupational health and safety and environmental protection adds up to   5 million since 2005 and is growing annually.

Opening the anniversary festivities at Bucim the Prime Minister of the Republic of North  Macedonia, Zoran Zaev said: “We continue to work together to promote and develop the mining sector in the Republic of North Macedonia as an important segment in our efforts to build a strong economy that will open up opportunities for all!”

Vasil Borutskij, General Manager of Bucim DOO Radovish: “Despite all the problems related to obtaining permits, the Borov Dol project is ongoing and we plan to transport the first ore from the Borov Dol mine into the flotation plant in Bucim before the next celebration of Miner’s Day in 2020. Implementation of the Borov Dol project will extend the operations of Bucim mine for at least 10 years with significant annual contributions to state and municipal budgets.”

Nikolajcho Nikolov, Deputy manager of Bucim DOO Radovish added: “Four decades ago, the mine was projected to work for only 17 years. Look at us, celebrating 40 years today! We are honored to celebrate our accomplishments together with our employees, citizens of Radovish, and partners. They have been an impressive 40 years and we are looking forward to honoring another ten so we can honor 50!”

In 2018 the company launched a project to open a new copper ore mine at Borov Dol. As a result the digging of copper ore can be prolonged until 2030, thereby maximizing the lifetime of exploitation of the flotation and other existing facilities at the Bucim mine. The impeccable reputation of the Bucim’s managing team, their willingness to adapt to the changing requirements of the modern world and efficient infrastructure built over the years, open unique opportunities for further regional consolidation and joint safe development of other mining projects, minimizing the impact on the environment.

Dan Bronstein, Chairman of the board, Solway Investment Group said: “Bucim’s 40th anniversary is the perfect occasion to celebrate and glance back into the past as well as look forward to the future. In 2005, some creativity and a desire to face calculated risks were required to bring Bucim to success. I can say I am glad we seized this opportunity 15 years ago and despite all the technical, social, and economic challenges, we delivered on our promises. I would like to thank the Government of North Macedonia, the people of Radovish, Bucim employees, our partners, and the rest of the stakeholders for the loyalty and trust they showed throughout these years. I believe with such involvement and support, together we will have many prosperous and blooming years to come in the future.”